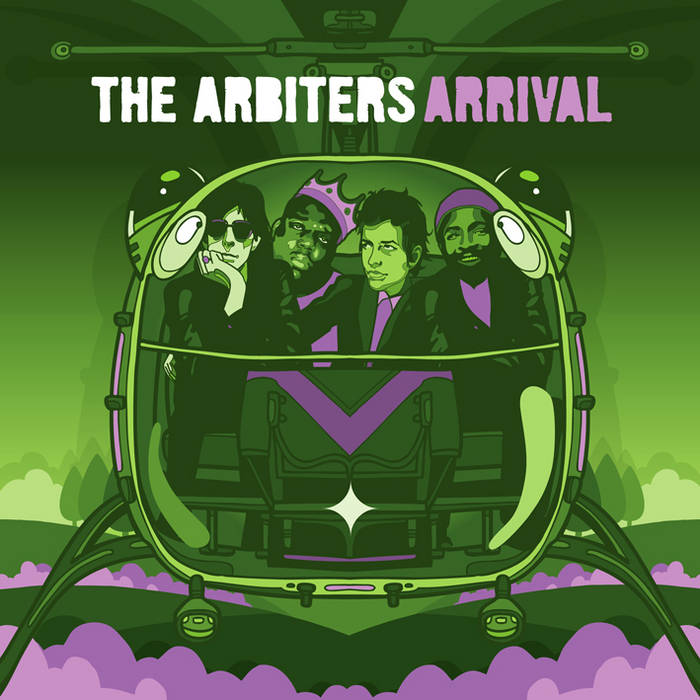 With a sound and style equal parts art project, waxploitation, and boogiedown, The Arbiters first hit in 2006 with their debut EP, They Are Biters. It struck a chord not only with crate diggers and clubgoers, but also with the folks over at Los Angeles tastemaker radio station KCRW, where repeated airplay vaulted The Arbiters to become one of the station’s most-requested and played artists that year, alongside Gnarls Barkley, Beck, and The Raconteurs.

Four years later, the crew is back to transforming both the extremely familiar and the deliciously obscure on The Arrival EP. “Ain’t No Shooter Shining” marries the warmth of Bill Withers with the charisma of Lil Wayne, laid-back Jamaican-style. “Exciters Go Back To Cali” features a hip-hop travelogue as told by Biggie and Mos Def, laid over a ‘70s Panamanian funk beat. “Hip Hop Is A Free Banquet” merges dramatic ‘60s gangster film score with a frenetic indie electro vibe. “Folks Love Going To The Same Old Go Go” flips the Motown script with a perfectly placed interlude by Peter, Bjorn & John, and Ludacris on the mic. “Virgin Voices” stitches together genre-hopping acapellas with the indie electronica of Phoenix. And “Tired Horses,” based on the bizarre Dylan song, is a strangely hypnotic concoction that found its jazzy backbone via Swedish band Koop.

Not content to let their smash-hop rest on its auditory laurels, The Arbiters merge sight with sound by creating smartly humorous, yet complex video montages, not just pushing the mash-up envelope, but also further paying homage to their favorite artists in the process.

Bandcamp Daily  your guide to the world of Bandcamp

Featured sounds by K.Spark and WIZDUMB, plus Basi joins the show to discuss his latest release.